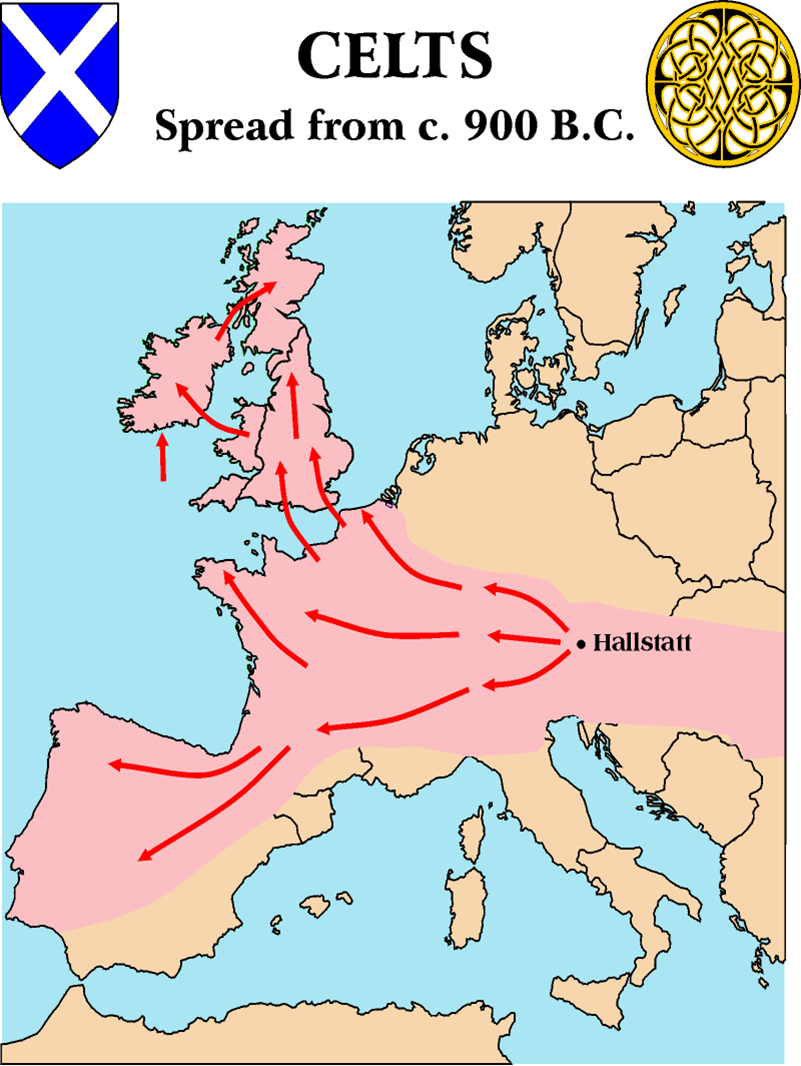 The oldest archaeological evidence of the Celts comes from Hallstatt, Austria, near Salzburg. Excavated graves of chieftains there, dating from about 700 BC, exhibit an Iron Age culture (one of the first in Europe) which received in Greek trade such luxury items as bronze and pottery vessels. It would appear that these wealthy Celts, based from Bavaria to Bohemia, controlled trade routes along the river systems of the Rhône, Seine, Rhine, and Danube and were the predominant and unifying element among the Celts
.

In their westward movement the Hallstatt warriors overran Celtic peoples of their own kind, incidentally introducing the use of iron, one of the reasons for their own over-lordship.

However, in the 1st century BC there was Germanic migration toward the south and west at the expense of the Celtic peoples who then inhabited much of western Germany. The Celtic Helvetii, for example, once extended as far east as the Main River. They were later confined by the Germanic peoples to the area that is now Switzerland.

The Celts controlled Trans Alpine Gaul (Gallia Transalpina), which comprised the whole territory from the Rhine River and the Alps westward to the Atlantic. But eventually they were overcome by Germanic tribes pressing westward toward and across the Rhine, and by the Romans in the south, poised for further annexations to the north.

The Germanic onslaught was first felt in Bohemia, the land of the Boii, and in Noricum, a Celtic kingdom in the eastern Alps. The German assailants were known as the Cimbri, a people generally thought to have originated in Jutland (Denmark). A Roman army sent to the relief of Noricum in 113 BC was defeated, and thereafter the Cimbri, now joined by the Teutoni, ravaged widely in Trans Alpine Gaul, overcoming all Gaul and Roman resistance.

On attempting to enter Italy, these German marauders were finally routed by Roman armies in 102 and 101 BC. There is no doubt that, during this period, many Celtic tribes, formerly living east of the Rhine, were forced to seek refuge west of the Rhine; and these migrations, as well as further German threats, gave Julius Caesar the opportunity in 58 BC to begin the campaigns that led to the Roman annexation of the whole of Gaul. 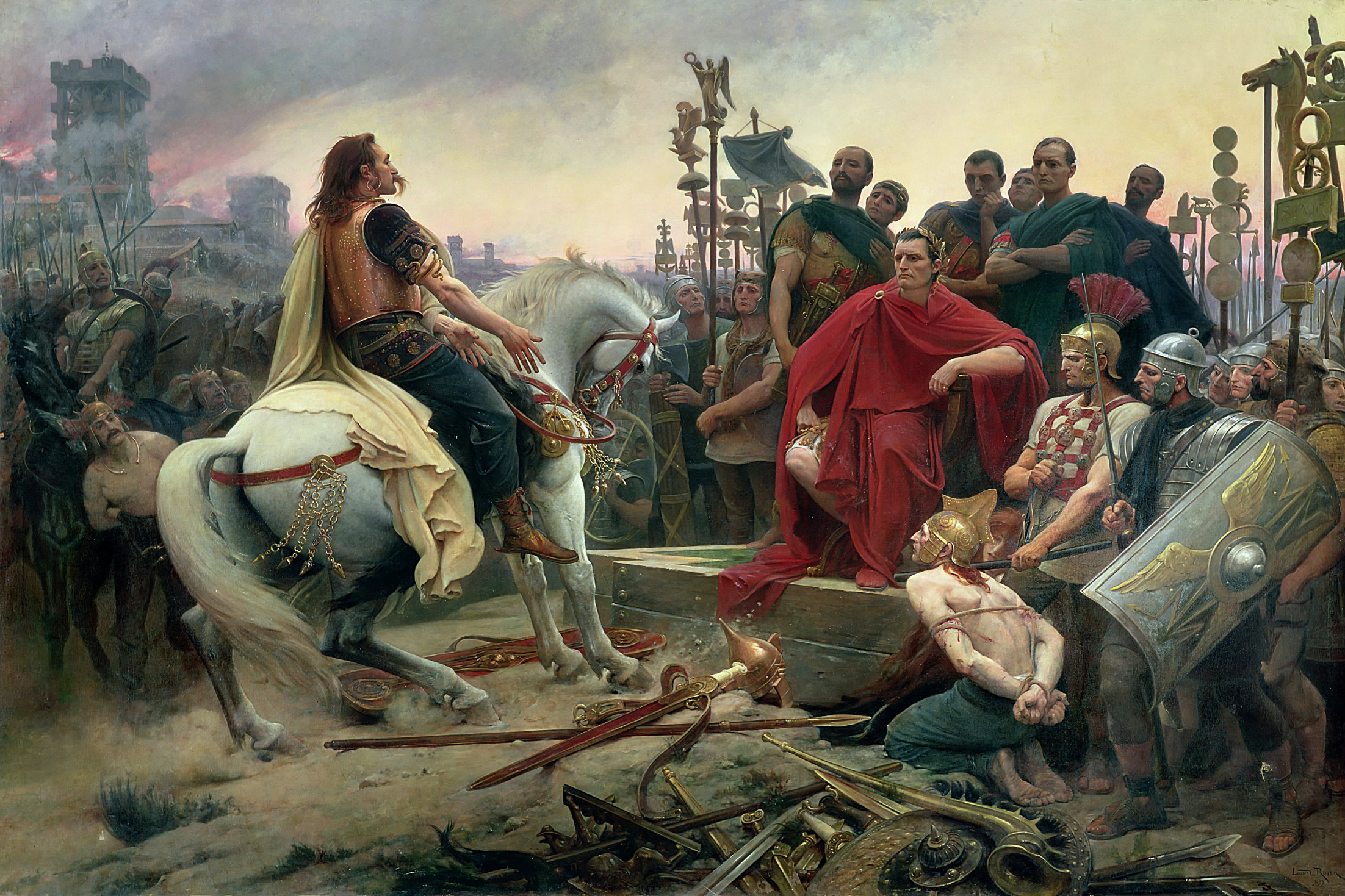 Julius Caesar waged war against the Celts for six years, from 58-52 B.C., before emerging victorious. The Celtic leader Vercingetorix surrendered to Caesar but was paraded around Rome in chains for the amusement of the Roman audience, then executed by ritual strangulation.

However, by the year 500 AD the entire western Roman Empire was under Germanic rule. Germanic Franks controlled the Celts in northeastern Gaul. The Germanic Burgundians were in the Rhône valley with the Germanic Visigoths as their western neighbors…until 507 when the Franks expelled the Visigoths from most of their Gallic possessions and pushed them into Spain where they lived until their extinction by the Muslims in 711.

The Germanic Ostrogoths established themselves in Rome and the rest of Italy and the Vandals moved into northern Africa.

Germanic Angles and Saxons migrated to England and by 500 AD their minority population ruled over the Celts who migrated here as early as 5000 BC.

In 568 the Germanic Lombards entered northern Italy, replaced the ruling Ostrogoths and lived there in an independent kingdom until they themselves were overthrown in 744 by their northern neighbors, the Germanic Franks. 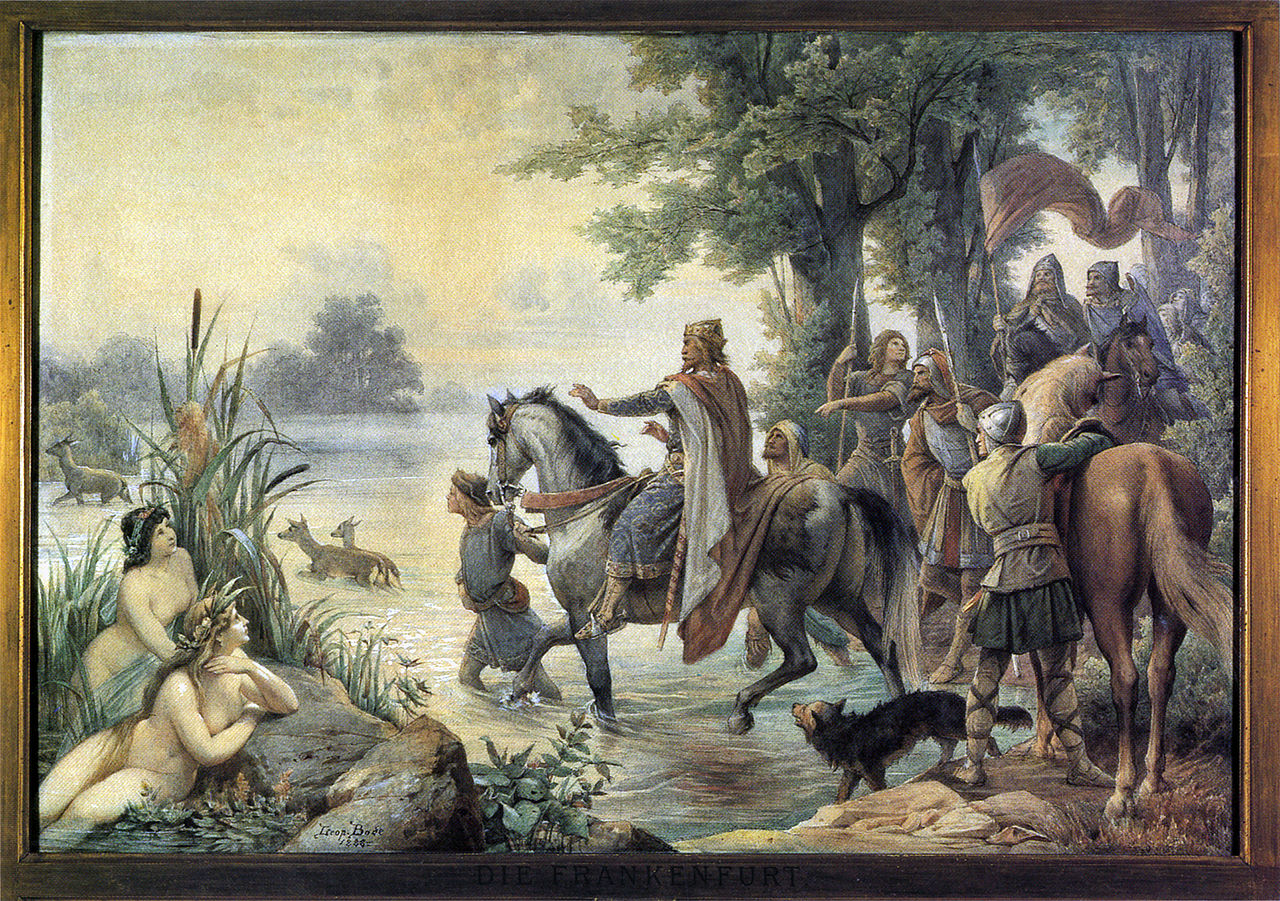 Charlemagne and his Franks “furt” (ford) the Main River, a painting by Leopold Bode, 1888….The scene depicts Karl the Great (known as Charlemagne) fording the low point in the Main River, after observing some deer that knew the low point and crossed within view. This lucky moment allowed Charlemagne to retreat across the river after suffering a defeat at the hands of Saxons. He later returned to this spot and founded a city and called it Frankfurt. Soon after he established the Holy Roman Empire in 800 A.D., Frankfurt became the Imperial seat and was the place where future Emperors were elected before their crowning in Aachen.

The areas of eastern Germany vacated by the Goths and others were filled up by the Slavs, who extended westward as far as Bohemia and the basin of the Elbe. But after the 8th century the Germans recovered eastern Germany, lower Austria, and much of Styria and Carinthia from the Slavs.