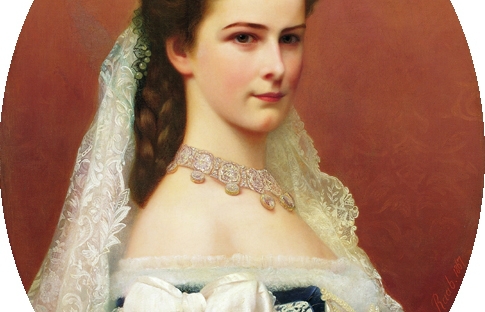 Elisabeth Princess of Bavaria was popularly known as Sissi, which was also the title of a 1957 movie trilogy about her life. She became Empress of Austria in 1854 due to her marriage to Emperor Franz Joseph I of Austria.

After 1869, at age thirty-two, she no longer sat for portraits and would not allow any photographs of her to be taken, so that her public image of the eternal beauty would not be challenged. The few photographs that were taken without her knowledge show a woman who was “graceful, but almost too slender”.

Elisabeth was an emotionally complex woman, perhaps due to the melancholy and eccentricity that was considered a given characteristic of her Wittelsbach lineage. The best-known member of the family was her favorite cousin, the eccentric Ludwig II of Bavaria….one of the reasons she was interested in the treatment of the mentally ill. In 1871 when the Emperor asked her what she would like as a gift for her Saint’s Day, she listed a young tiger and a medallion, but: “…a fully equipped lunatic asylum would please me most”.

At home, the only quality for which she felt herself appreciated… and the only thing over which she had control… was her physical appearance. Her beauty was the primary source of her self-esteem. As a perfectionist in her attitudes, she became a slave to her own beauty and image. At 5 feet 8 inches, Elisabeth was unusually tall for this era, but she maintained her 110 pound weight even after four pregnancies. She achieved this through fasting and exercise.

Whenever her weight threatened to exceed 110 pounds, a “fasting cure” or “hunger cure” would follow, which involved almost complete fasting… so she either had the juice of half-raw beefsteaks squeezed into a thin soup, or else adhered to a diet of milk and eggs. The empress also developed extremely rigorous and disciplined exercise habits. Every castle she lived in was equipped with a gymnasium…including a mat and parallel bars in her bedroom that she used every morning.

Elisabeth tried to influence her husband regarding his Italian and Hungarian subjects. When she traveled to Italy with him she persuaded him to show mercy toward political prisoners. In 1857 Elisabeth visited Hungary for the first time with her husband and two daughters, and it left a deep and lasting impression upon her, probably because in Hungary she found a welcome respite from the constraints of Austrian court life. She became acquainted with an aristocratic independence that did not hide its sentiments behind courtly forms of speech. She reached out in sympathy to the people of this land, unlike her mother-in-law the archduchess, who despised the Hungarians. In contrast, Elisabeth felt such an affinity for them that she began to learn Hungarian… and the country reciprocated in its adoration of her.

The period of 1859–60, during which Emperor Franz-Joseph suffered political and military defeats in Italy, coincided with her sexual withdrawal from her husband. At age 22, after three pregnancies in rapid succession, and her losing battle with her mother-in-law for dominance in rearing her children, she withdrew from her husband. This is the time when she reduced her waist to 16 inches in circumference, deliberately and defiantly flaunting this exaggerated dimension, which angered her mother-in-law, who expected her to be pregnant continuously.

Elisabeth fell into her old pattern of escaping boredom and dull court protocol through frequent walking and riding, using her health as an excuse to avoid both official obligations and sexual intimacy. Her successful avoidance of further pregnancies would have been a natural reaction to having been assigned the role of an imperial brood mare, bearing a child a year only to have it taken away from her, but the importance of preserving her youthful appearance was an important influence in her decision.

After 8 years of using every excuse to avoid pregnancy, Elisabeth decided that she wanted a fourth child. Her decision was at once a deliberate personal choice and a political negotiation: by returning to the marriage bed, she ensured that Hungary… with which she felt an intense emotional alliance… would gain an equal footing with Austria.The result was the Austro-Hungarian Compromise of 1867, creating the double monarchy of Austria–Hungary, whereby Franz Joseph and Elisabeth were officially crowned King and Queen of Hungary.

In addition to her rigorous exercise routines Elisabeth practiced a true beauty cult, one that was highly ascetic, solitary, and prone to bizarre, eccentric, and almost mystic routines. Daily care of her abundant and extremely long hair took at least three hours. However, she used these idle hours to learn and perfect her command of languages…she spoke fluent German, English and French, modern Greek and Hungarian.

Unlike other women of her time, Elisabeth used little cosmetics or perfume, as she wished to showcase her natural beauty, but she tested countless beauty products prepared in the court pharmacy, or prepared by a lady-in-waiting in her own apartments. Rather than using creams and emollients, she experimented with a wide variety of facial tonics and waters, from which she apparently expected more results. Elisabeth slept without a pillow on a metal bedstead, all the better to retain her upright posture, with either raw veal or crushed strawberries lining her nightly leather facial mask. She was heavily massaged and often slept with cloths soaked in either violet- or cider-vinegar above her hips to preserve her slim waist, and her neck was wrapped with cloths soaked in Kummerfeld-toned washing water. To further preserve her skin tone, she took a cold shower every morning and an olive oil bath every evening.

In 1889 Elisabeth’s life was shattered by the death of her only son Rudolf, who was found dead together with his young lover Baroness Mary Vetsera, in what was suspected to be a murder-suicide on Rudolf’s part. The scandal was known as the Mayerling Incident after the name of Rudolf’s hunting lodge in Lower Austria, where they were found. Elisabeth never recovered from the tragedy, She sank even further into melancholy because she had lost her father in 1888, her only son in 1889, her sister in 1890 and her mother in 1892.

The Mayerling scandal increased public interest in Elisabeth, and she continued to be an icon and a sensation in her own right wherever she went. She wore long black gowns that could be buttoned up at the bottom, and carried a white parasol made of leather in addition to a concealing fan to hide her face from the curious.

While travelling in Geneva in 1898, she was stabbed to death by an Italian anarchist who selected her because he had missed his chance to assassinate Prince Philippe, Duke of Orléans, and wanted to kill the next member of royalty that he saw. Elisabeth thus died prematurely at the age of 60, but she nevertheless was the longest serving Empress of Austria.

Elisabeth thus died prematurely at the age of 60, but she nevertheless was the longest serving Empress of Austria.

In the German-speaking world, Elisabeth’s name is often associated with a trilogy of romantic films about her life directed by Ernst Marischka which starred a teenage Romy Schneider:
Sissi (1955)
Sissi — die junge Kaiserin (1956) (Sissi — The Young Empress)
Sissi — Schicksalsjahre einer Kaiserin (1957) (Sissi -Fateful Years of an Empress)
Forever My Love is a condensed version, with the three films edited down into one feature and dubbed in English. This version was released in North America in 1962.